More Stuff I am Into - Harry Dewulf

More Stuff I am Into

I don't just edit n﻿﻿ovels, record and publish amateurish youtube videos of Q&A on writing fiction, and create courses to teach you how to﻿﻿ write better book﻿﻿s, or get people reading them.

People always imagine that authors are strange, secretive, solitary men who who sit in book-filled dens and churn out agonizing page after agonizing page in spite of the obese black bear of writer's block.
Actually, though most authors are housewives. And they steal their writing time where they can - between shopping for groceries, fetching the kids, doing the laundry, working part time, working full time... increasingly, though still not enough IMHO, they are enabled in their writing by their spouses who share the load, or their spouses who appreciate the quality of their writing, who take more than a half share, so the writing can happen. Okay, rant over, I'm sure you get the picture.

I have no idea how people imagine the life of a freelance editor, but I don't just lie in a hammock drinking yerba mate, eating alfajores and reading. Although I do spend some of my time doing that.​ I also spend quite a lot of time looking after my garden. Anyway, here are a few other places you can find me on the internets:

New Scientist is a weekly publication that I have been reading for more than 30 years. It's as much part of my culture as BBC Radio 4. Science journalism requires a certain rigour; but rigidly keeping to perfectly referenced and factual information makes for a somewhat pointless read. NS balances this by plastering its covers with eye-catching images and outrageous claims, and now does the same with its Twitter feed.

I have had four letters to the editor published in NS; it's a special moment for me, to know that I've written something that is on point, and concise and dense enough to enrich the pages of my favourite periodical. In case you don't have a subscription, my letters are printed in full below. 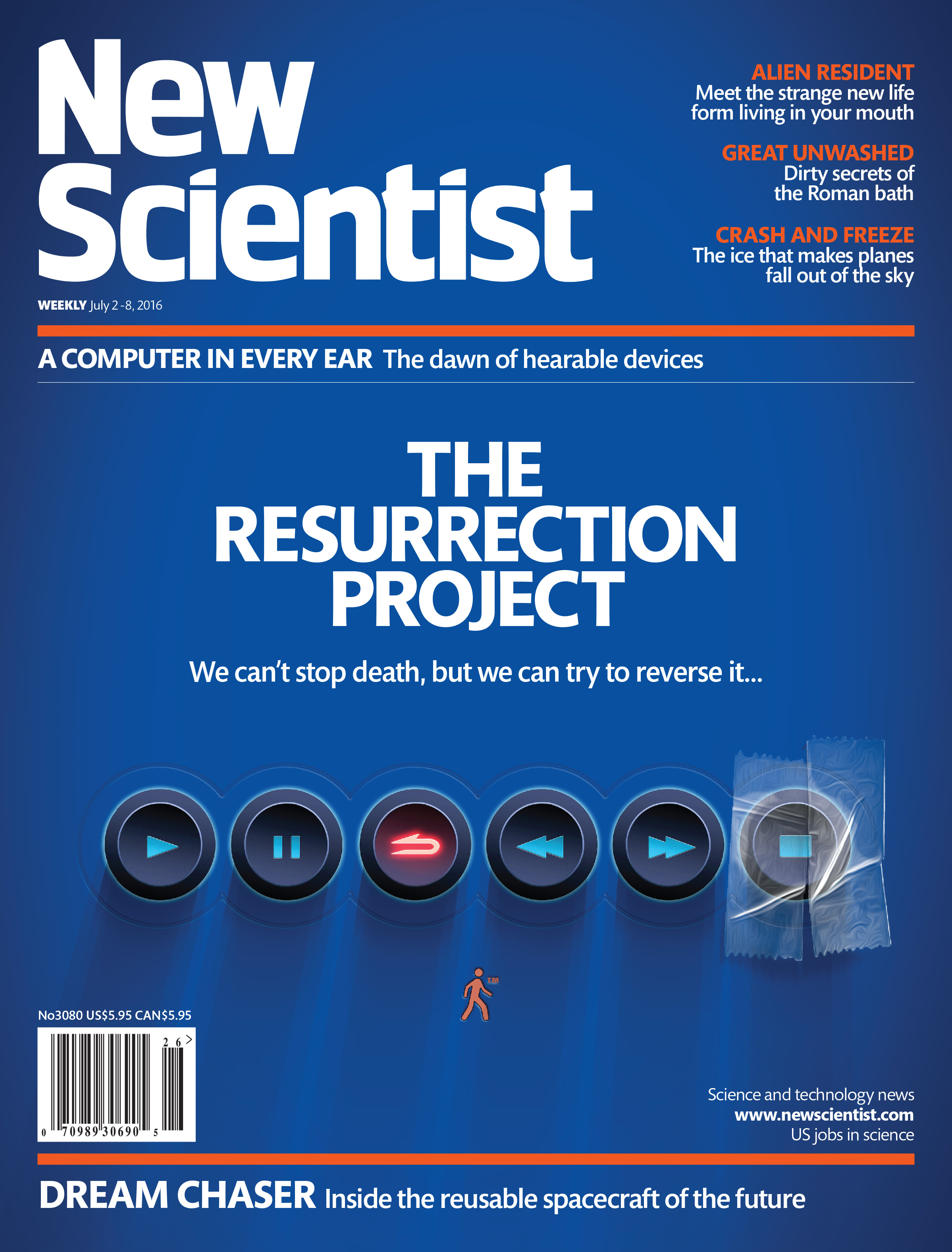 In this letter, I apply a couple of key writing principles:
density - each comma'd subclause adds depth to the question by including an additional set of ideas
evoking a story - in this case, in reverse; my letter is written to suggest the idea of working out from the end of a story how it began. It can seem almost impossible, but mystery writers do it all the time.

Colin Stuart gives us yet another revision to the hypothesised process of the formation of our solar system, based on modelling its evolution (23 April, p 30). I wonder whether, even in a deterministic universe, it is really possible for the current state to have been arrived at in only one way. Surely there must, given the timescales involved, be millions of different initial states, any of which could have resulted in the current state, making all such speculation a little redundant?
Houdelaincourt, France

The editor writes:
• It is surprisingly difficult to get a set of initial conditions that exactly reproduces what the solar system looks like. So while there's no guarantee you have found a unique solution if the model ends up with what we observe, it's quite likely. You can be more certain by re-running the algorithm.

About article in issue 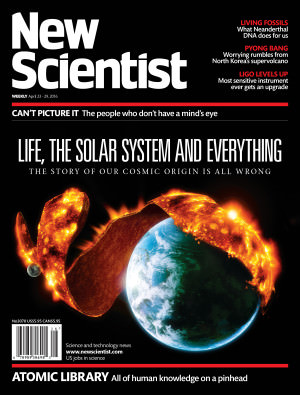 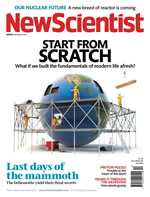 This letter has turned out to be pretty quotable - several people have referenced it elsewhere, probably because of the sound-byte in the middle (in boldface).

I am a keen gamer, with or without a computer, and this is not unrelated to my two chosen professions of IT specialist and writer/editor. The “gamification” of our everyday lives that MacGregor Campbell describes (8 January, p 36) certainly pushes buttons and will probably catch on in the way Campbell anticipates. I would, however, add a word of caution to those considering investing in apps and other technologies to turn ordinary activities into games.

The best computer games exploit two basic desires. The first is to learn: a well-designed learning curve provides satisfaction from the achievement of mastery of the game. The greater the complexity, the greater the satisfaction.

The second desire is for a story. First-person “shooter” games involving one participant have the player follow a predetermined story path, deriving satisfaction from discovering the twists and turns.

Titles like Grand Theft Auto began to expand into multiple interwoven plot lines that could be followed in a non-linear fashion. Recently, cooperative multiplayer modes have appeared, where players can team up to play through the storyline.

Play teaches us skills. Stories teach us what to do with them.

Much of the gaming described in your article is light on play and storytelling, and heavy on “cumulomania” – the mindless racking-up of points, powers and achievements. Even the games strongest in learning and storytelling, like the Civilization series, eventually deteriorate into steady statistical accumulation.

Apps which rely on our attachment to endless accumulation of tokens and whose value is derived from potentially divisive social competition will have to be continually refreshed or replaced with new content – with diminishing returns as all the niches for apps that teach something useful are occupied.

If I am wrong about the games bubble, then the world will become increasingly divided between dopamine freaks endlessly indulging their cumulomania and those who prefer to use their time accumulating real value. 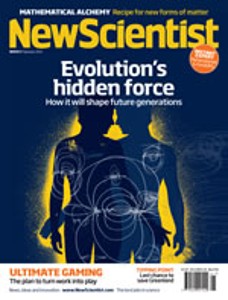 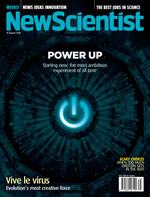 I respect Dawkins' work but it always bothers me that he seems to think you can solve the problems caused by potentially harmful religious beliefs or systems by presenting lots of cold, hard facts.
Consequently, it's always a joy to use the rhetorical technique in this letter:
"﻿Flaunt your principles﻿ by defending your opponent​."

Emma Young asks whether evidence of transgenerational epigenetic changes challenges biologist Richard Dawkins’s ubiquitous “selfish gene” (12 July, p 28). Much as it pains me to say so, it doesn’t, but for reasons quite unrelated to the evasive rebuff you quoted from Dawkins himself.

The possibility that gene expression can vary and be transmitted to offspring is itself an evolved adaptation – one that allows an organism to thrive in a broader range of environments. This is essential to organisms not able to alter their environment or to seek a better one.

As such, epigenetics is more akin to the cultural transmission of behavioural changes, another evolved possibility.

It is confusing to present it as a mechanism for evolution, or indeed as a paradigm for explaining selection – which the selfish gene seems to be. 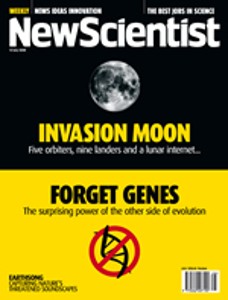 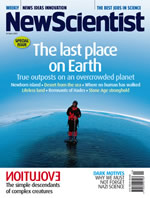 At the time, and for a few years after, this letter cause a certain amount of trolling and counterfeiting. I even discovered a couple of websites that were selling copies of "Chaff-by Harry Dewulf - the ultimate method of disguising your browsing history."

Although I wrote a prototype of Chaff - in .NET I think, I never made a production version and never put it on the internet anywhere either. I no longer have the sources - but it's literally 10 minutes of programming.

Apparently Microsoft is developing techniques to guess personal information from your web-browsing history (19 May, p 32). My reaction was to write a tiny program I’ve called “Chaff”.

It navigates to www.newscientist.com and selects three words at random, then uses a famous web search engine to look them up. It then visits one of the first three results, stays there a random number of seconds and returns to the search results page, where it selects another page at random and repeats, periodically selecting three more words from a new page.

The aim is to produce a superficially real-looking browsing history – the chaff – that would be horribly difficult to separate from the wheat of my real browsing, without creating any serious nuisance. Chaff could be further tuned to match aspects of my own browsing behaviour.

This all follows from the observation that the secret to concealment is not to hide a needle in a haystack, but to build a stack of needles and hide it there. 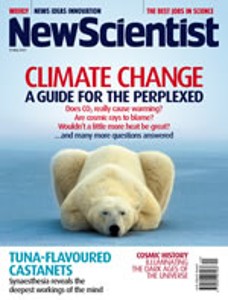 The Daily WTF has been around for over a decade, celebrating, decrying or just weeping into its beer over perversions in code, and the working environment and culture of coding.

In coding terms, WTF stands for "worse than failure." Most bad code, it is to be hoped, just causes a system to hang, crash, lock up, stop, or otherwise just 'fail.' To be worse than failure, it has to cause harm, do nothing, or just be more than a little embarrassing.

Back when I was (among other things) working in scripting, I was occasionally asked to contribute actual code, with mixed results. But I have always been pleased with the results of the code I submitted to The Daily WTF, once the system using it was safely in production.

I am particularly pleased with the comments.

A long, long, time ago, a radio programme billed as 'the antidote to panel games' was invented. That radio programme is called I'm Sorry I Haven't a Clue. Astonishingly, it is still running today.

Back in the days of Netscape Navigator, I joined a community of enthusiastic listeners to ISIHAC, where we played word and mind games similar to, or derived from, the games played on the show. And still do today. The hub of this activity is MCiOS - Mornington Crescent in Outer Space.

Mornington Crescent is a difficult game, the rules take a lifetime to master, and it's really best to just play, and pick up the rules as you go along, although a copy of Harry Beck's map and a pocket edition of Ruttsborough's can help.

I play online MC using a pseudonym that you might be able to guess.